We finished the previous post with a summary diagram of the pattern that I suggest Matthew is using to divide the forty births of vs. 2-16 into the three groups of v. 17. In this post I wish to make one or two observations about the diagram itself, and to  consider some more of its links to some of the underpinning Old Testament history.

Here is the diagram:

1) Our analysis of Matthew’s “genealogical” table in vs. 2-16, and its summary in v.17 drew attention to the prepositions that Matthew has used. In particular, these were (in vs. 11 and 12) epi basically meaning “upon, near, at” etc., meta meaning “after” and (in v. 17) apo meaning “away from” and heos meaning “to”. With regard to these last two prepositions (which each occur 3 times in v. 17), it seemed to me that Matthew was consistent in that apo started from “within” the entity described but heos was as inclusive as possible going up to the far limit of the entity. Here is a little diagram to illustrate this: 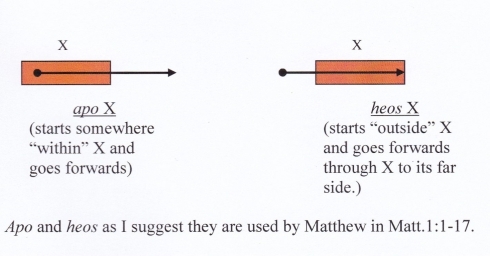 By careful and accurate use of these four prepositions in relation to the two dividing events in vs. 2-16, namely David and the “Carrying Away of (to) Babylon”, Matthew was able to allocate the 40 begettings/births of vs. 2-26 to the three groups of 14 created by the two break points, with single symmetrically-located overlaps at each break point – thereby achieving a symmetry that the “a generation equals a person” approaches to the “allocation problem” had been unable, in general, to achieve.

3) For the sake of simplicity, I have “compressed” the two-stage process of David’s accession to the kingship and the two-stage process of the Carrying Away. There was a seven and a half year gap between David’s kingship over Judah and his full kingship over Israel and Judah, and there was an 11 year gap between the first (main) carrying away, which included Jechonias (i.e. Jehoiachin), and the second in which Zedekiah (described in the OT both as Jechonias’ uncle and as his brother) was carried off. None of the births recorded by Matthew occurred during either of these periods however. (We could even argue for a three-stage process: David was actually anointed by Samuel long before he was officially crowned king, and Daniel, his friends and others were taken off to Babylon during the reign of Jehoiakim – before the main exile events (recorded in Dan. ch. 1). Again none of Matthew’s births are affected by these are inclusions.)

Regarding the first translation, “Josiah begat Jechonias at the time of the carrying away“, one could reasonably object that that statement  is historically false since: 1)  Jechonias was 18 years old when he was carried into exile during the first carrying away, so, the time difference between the two events shows that the translators are interpreting  epi  somewhat flexibly (not to put it more strongly!) Further, 2) Josiah, who was actually Jechonias’ grandfather, (the missing member of the family tree here is Jehoiakim who Matthew does not mention) had actually died eleven years three months before the Exile. As conservative Evangelicals, we do not support false statements, and anyway,  even if one has  a low view of inspiration, should one consider it likely that Matthew would blunder over such a key event in Israel’s history?

Now, regarding the second translation, “Josiah begat Jechonias around the time of the carrying away”, this yields a historically acceptable meaning, but it is not a valid translation option for epi – as at least some commentators realise. This is because, by the use of the word “around” rather than “at”, the translators are not here intending to allow for any overlap in time between the two events: they are being treated as disjunct, and this is not a valid meaning for epi with the genitive when referring to time – as can be verified by consulting the lexicons.  Now one of the meanings of epi with the Genitive case (as here), which is used, occurs  when what follows is a person (unlike here!) and it  refers to an event occurring during the administration of that person – e.g. epi Klaudioui in Acts 11:28 means, effectively, “during (the reign of) Claudius”. However, in Rom 1:10, Paul makes mention of the Romans “epi his prayers” (i.e. during his prayers or whilst he is praying) so this meaning “during” is not restricted to the “period of administration” of people only, since here Paul is speaking of an event occurring during his time of prayer.

This is a straightforward question of biblical exegesis. It is a question that is, strictly speaking, separate from the attempt to allocate Matthew’s “generations” to his three time periods, even though it should form part of any answer to that question – including this one!

I wish to suggest that by “the carrying away of (to) Babylon”, Matthew refers to the time period that stretches all the way from Yahweh’s  initial announcement of that carrying away to Josiah right up to and including the actual departure of the king, and others, to Babylon, and that events which occur within that time period – such as the birth of Jechonias –  can be said to occur epi the carrying away to Babylon: they take place on the “platform” of that certainty. If this is correct, then Matthew is saying that the process of the carrying away starts with God’s irrevocable decree, and continues with the various steps and divinely controlled exigencies of the intervening history, right up to and including the departure itself.

In defence of this idea, I would point to the Days of Creation. We read statements of the form: On Day X, God created Y. But actually, the  “Y” that is created is the result of the day’s work which starts with God’s decree, “And God said, Let there be Y . . ” The first step is any event is God’s express will, whether declared or otherwise, that it should be so. Once God says it,  the speech inevitably produces the effect – and the time in between accomplishes what God has purposed. The greater reality is Heaven’s, and the time gap, as it were, is when He brings the earth “into line”! In the present case, the carrying away is a reality (the greater reality!) from the moment God announces it, and so it “starts” from that moment. Another example, to which we will return, is Matthew’s account of Jesus’ birth in vs. 18-25. Mary is with child in v.18, and the birth is in v.25, and in between are various steps involving an angel and Joseph etc. by which God brings about His purposes. But, in describing all this, Matthew claims that “the birth was thus . . .” (v.18). So I think that the expression “the carrying away” can similarly include the “thus-ness” of the carrying away itself – particularly when the first event of this “thus-ness” is the announcement expressing God’s will and purpose, and which is the raison d’etre for the whole thing, and which  causes the final carrying away event and its intermediate steps.

There is one more aspect to this that I suggest is worth mentioning. The delay between 1)the discovery of the Book of the Torah and with it announcement of God’s judgement etc. and 2) the actual departure for Babylon was the result of good King Josiah’s humble response to the announcement. God says that He will delay the judgement until after Josiah’s death. From this perspective, the remaining 13 years of Josiah’s reign, (and  actually the next 3 years of Jehoiakim’s reign) represent a hiatus – a separation between announcement and judgement that has been “added in”  and this perhaps tends to obscure the close link between the announcement and the execution of the judgement. When viewed in this way, the whole period is the “announced and executed judgement of Exile”, with the delay as a sort of secondary interpolation, graciously allowed by God, into the process – and which, in His sovereign will, He uses (in various wise ways)  to prepare the way for Exile.

Well, what were these events, and people, stamped as it were, with a rubber stamp marked  “For the Exile!”, which led up to the actual departure event. That is for the next post.

Like Loading...
‹ The Threefold Structure of Matt. 1:2-16 – Part 2
The Carrying Away to Babylon – Between the Announcement and the Departure ›