In this post, I want to carry out the relatively easy task of showing that Matthew’s three groups of 14 “generations” (for which, in these posts,  I have been suggesting the explanation that “generations = births”) fit neatly and symmetrically into these three time divisions – with two symmetrically placed overlaps. (It was this lack of symmetry that was the primary reason for the problems that commentators note with regard to the standard “genealogical” solutions (in which the “generations” are individuals, not births/begettings) of Matthew 1:17: for example, if the generation called “David” was allocated to two of Matthew’s groups of 14 simultaneously, then the generation called Jehoiachin had to be allocated to just one, and vice versa). (In future posts, I hope to  explore further the possibility that Matthew intends us to understand King Jehoiakim as the missing generation – thus “making good” the above noted deficit.)

Well, let’s start with the 14 births “from Abraham to David” to which Matthew refers in v.17:

Now Abraham simply appears “without a beginning” at the start of Matthew’s account. His birth is not described. (This corresponds to Jesus Christ who stands “without an ending” – for He continues for ever – at the conclusion of Matthew’s account.) Thus, for Abraham there is only one begetting described, and for Jesus Christ, there is only one being born – His own birth. Perhaps we could think of this as a line of people holding hands. The individuals at either end hold only one hand. Everyone else holds two hands. Of course, this analogy doesn’t quite work with regard to Joseph – since he was the husband of Mary but he did not beget Jesus.

The first birth then is “Abraham begat Isaac”, and the second “Isaac begat Jacob” and so on. The thirteenth is “Jesse begat David” and the fourteenth “David begat Solomon”. On our understanding that Matthew is describing births, not individuals then, the expression “from Abraham to David” is “inclusive” at the David end – it includes both David’s “being begotten” of Jesse and his subsequent “begetting” of Solomon. The Greek words for “from” and “to” throughout v.17 are just the standard words apo and heos. In this particular instance, heos seems to be as inclusive as possible : it appears to go right up to David’s death. This is accurate too: the next birth in the sequence, Solomon’s begetting of Rehoboam, occurred after David’s death, and so could not be included within “heos David”. At the Abraham end, all we can say at this stage is that “apo Abraham” (from Abraham) is as inclusive as it can be given that Abraham “stands before us” as it were – presumably fully grown – at the start of Matthew’s “genealogy”. (Perhaps we should think of the calling of Abraham, or the promise of Isaac as the start point?)

Let us now move to the other end of the table, and consider Matthew’s expression “from the carrying away of Babylon to Christ” in v. 17. Here, we will work backwards:

This (surprising?) use of epi by Matthew in v.11 (when we could “reasonably” have expected pro for example) is actually an exegetical issue in its own right, and can (and perhaps should!) be addressed independently of one’s proposed solution to the “3×14 generations” problem which we are currently attempting to solve. At the moment, we are showing how, on the understanding that Matthew is describing births/begettings, verse 17 of Matthew, with its 3 groups of 14 “generations”, is consistent with the information supplied in verses 2-16.

So, for now we note that just as the two births (of David and of Solomon) to which the label “the king” is attached in v.6 are included in the first triad of 14 births, so the two births (of Jechonias and Salathiel) to which the label “the carrying away of Babylon” is attached in vs. 11 and 12 are included in the third triad of 14 births.

So far so good. But what about the middle triad? We are particularly interested in this because, although “heos” always seems to be as inclusive as possible, there is a slight question mark over the meaning of apo – which means “away from”. Will “apo David” start with his birth, or will it start with his kingship and/or begetting of Solomon, or will it start upon his death?!

Well, verse 17 says, “from David to the carrying away of Babylon, fourteen generations”. Now “Josiah begat Jechonias” occurs “epi” the carrying away, but “Jechonias begat Salathiel” is after (meta) the carrying away. So Jechonias begat Salathiel cannot really be included. Let us take our fourteenth begetting as Josiah begat Jechonias. Then the 13th begetting is Amon begat Josiah etc. If we continue back, the second begetting is Solomon begat Rehoboam, and the first begetting is . . David begat Solomon! So, “apo David”, according to our current hypothesis, means “away from David” where David is treated as, basically, an adult. The point at which “David” starts then is perhaps his kingship, or when he was first called by God. We will come back to this, but for now we note:

1) Our hypothesis gives us a consistent understanding of the relationship between verse 17 and verses 2-16, in which

3) This solution presents us with an entirely symmetrical allocation of births to Matthew’s three time periods in v. 17. This is illustrated below:

There is a lot more I would like to say about this, and that will be for another post.

However, below is a diagram which attempts to summarise our results so far. 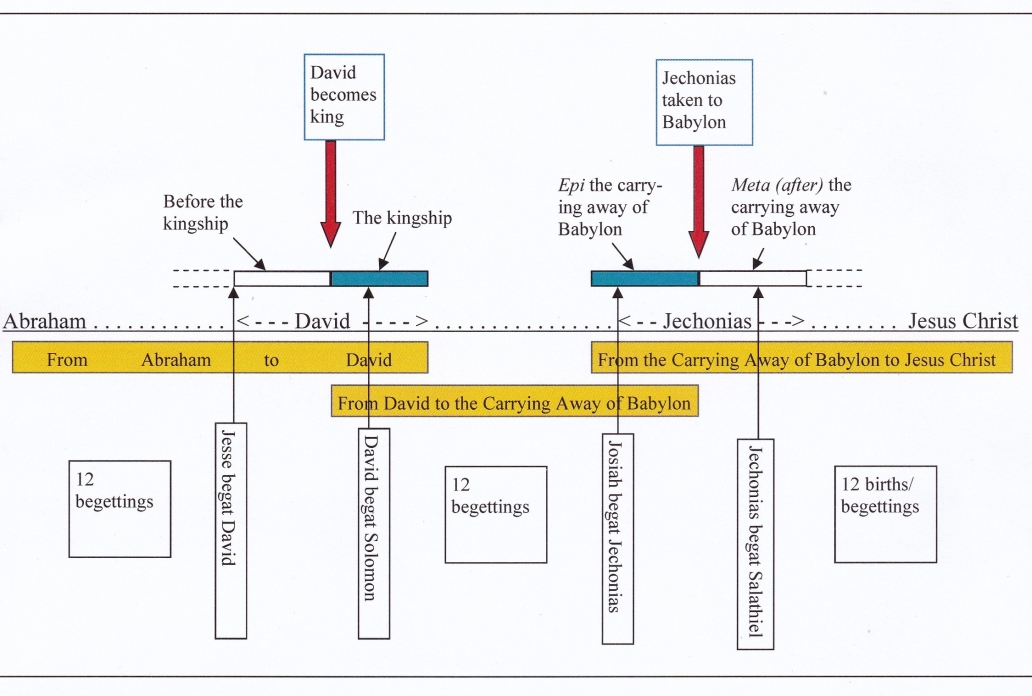