Lazarus and Absalom – an Inter-textual reading 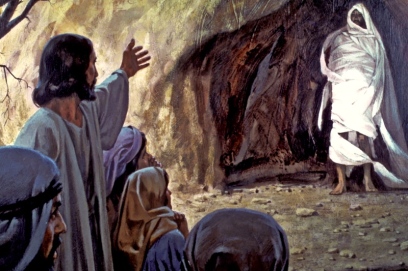 This is an article I wrote a long time ago, (and which is probably in need of revising at some stage!) It is basically an attempt to show that the events described in the Old Testament account of Absalom’s rebellion against King David correspond typologically, structurally and inter-textually  to events described in the Gospel of John. In particular, these events are the account of Lazarus’ death and resurrection and some aspects of the arrest, crucifixion and burial of Jesus Christ. By using the same OT narrative in these related ways, John links the raising of Lazarus to the death of Christ.

The article itself concentrates primarily on linking the  Lazarus narrative to Absalom’s rebellion (hence the title), but references are also made to the circumstances leading up to and including Christ’s death. For example, it is argued that Absalom’s death is linked to Christ’s crucifixion by  means of Zech. 12:10, which is quoted in John 19:37. (Note: Absalom is described as “unblemished” in 2 Sam. 14:25). (Absalom’s death is, in some ways an “inverse” type of Christ’s death. Just as Adam’s sinfulness is an inverse type of Christ’s anti-typical righteousness in Romans Ch. 5, – in fact Paul uses the word “tupos” to describe both the similarities and the contrasts between Christ and Adam, so I – along with many others – am suggesting that there is a link between the sinful Absalom and the righteous Christ in their respective deaths.)

Amongst the links between the Old Testament and the New Testament events are:

The essence of the argument put forward in the article is that Jesus initially goes to safety on the far side of the Jordan, even though this strategy this means the death of Lazarus, just as David flees beyond the Jordan, and, following advice, does not get involved in the fighting during which Absalom is killed and the conspiracy defeated. However, having anti-typically fulfilled this aspect of David’s life, once news of Lazarus’ death comes to Him, Jesus goes against the advice of the disciples, and goes into danger to reverse Lazarus’ death – corresponding to the very thing that David wished, but did not do (“Would that I had died in thy place”). The stages of Absalom’s death are then systematically and anti-typically reversed in the raising of Lazarus. Jesus thus does both what David actually did, and also what David prophetically pointed to in his lament over Absalom.

It seems initially that Jesus has reversed Lazarus death, whilst avoiding death Himself, but Mary’s anointing of Jesus at the feast at the beginning of John Ch. 12 shows this will not be the case, and later in the Gospel, Jesus  goes forth across Kidron to the Mount of Olives (like David) where, instead of receiving help like David, He, as the Anti-type who surpasses the type, is betrayed by Judas. Jesus also enables His disciples  to leave (18:8) whereas David gathers supporters to him at this time. Jesus’ subsequent death by crucifixion is thus, structurally in John’s inter-textual use of the Absalom narrative, the price paid by Jesus to reverse Lazarus’ death, and corresponds to David’s unfulfilled wish to die in Absalom’s place.

In these three ways, then – imitating David’s flight, reversing the death of Lazarus, and Himself being arrested and going to His death on the cross, Jesus recapitulates and improves on  most, if not all (so it seems to me) of the events in the Absalom narrative

That was a very approximate attempt to convey the substance of the article. It is quite long, and can be accessed by clicking on the link below.

I would really value help (including criticism!) regarding this article. Please let me know what you think especially as I hope to produce a revised version of it at some stage.