The first, second and fourth sections are basically narrative. The first section describes the fact that Joseph’s betrothed wife Mary was found with child of the Holy Spirit before Joseph and Mary’s coming together and tells us of Joseph’s reaction The second section tells us of Joseph’s encounter with the angel. Then there is a break in the narrative and in the third section, Matthew “looks back” into the past to tell us that all these things were happening in accordance with prophecy and finally section four tells us of subsequent events—of Joseph’s obedient response including the marriage and the birth of Jesus.

As a result of this tight linkage, there is a certain amount of repetition of key themes and expressions, and this, together with Matthew’s careful structuring, make it possible to analyse the structural aspects of the passage in a number of different but “superimposed” ways in which chiastic and parallel structures are intermingled.

And here are the three suggested structural possibilities. The six “combinations” are indicated by gold lines: 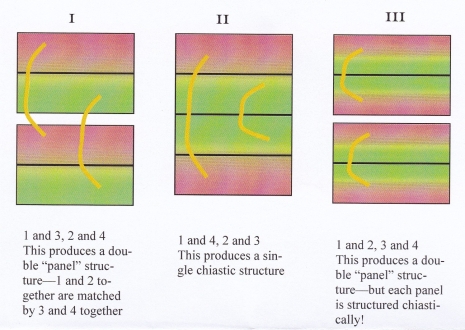 In two previous posts (The birth of Jesus in Matthew 1:18-25 parts 2 and 3) I have attempted to give the structure of III above —i.e. that it is the arrangement of two smaller chiasms made up of sections 1 and 2 together and sections 3 and 4 together. I also attempted to show (in The Birth of Jesus in Matt. 1:18-25 Part 1) that sections 2 and 4 were linked—that is, one half of structure I in the diagram above. In the rest of this post, I propose to show how sections 1 and 3 might be linked, thus completing structure I, and then in a future post, I hope to describe structure II by indicating connections between sections 1 and 4 and between sections 2 and 3.

Here is the proposed analysis of sections 1 and 3 considered together:

1) In the previous post we showed that sections 2 and 4 were very closely linked in parallel, with a minor chiastic element.

2) The diagram shows sections 1 and 3. The chiastic parts of the diagram, A,A`, B,B`, and C,C` are straightforward.

3) The more speculative part of the diagram concerns the parallel components D and D` which are subdivided into parts i) and ii), I`) and ii`) respectively.

4) If we take Dii) and D`ii`) first, then in both of these, reference is made back to earlier events, If we assume with most commentators that the angel is still speaking in v.22 (i.e. the angel tells Joseph that “All this has come to pass in order that might be fulfilled . . “ then the earlier events referred to in both cases are the same. There is however, a contrast between Joseph’s meditating, which is an internal process and the earlier external pronouncement of the Lord through the prophet, which is now being announced afresh. It was the difference between these two “purposings”— Joseph’s and the Lord’s (if I could put it that way) – that necessitated the intervention of the angel of the Lord described in the intervening section, section 2.

However, it is the comparison of sections Di) and D`i`) that is the most problematic for the entire analysis. In these two sections, rightly or wrongly, we find ourselves comparing and contrasting the thoughts and intended actions of righteous Joseph with the work of the Lord Jesus Himself in saving His people from their sins.

The description of Joseph as “righteous” at the start of v. 19 is discussed extensively in the commentaries, and this discussion has even affected the translation of this verse in one case (the NIV translates “righteous” as “faithful to the law” in v.19—which is, I suggest an interpretation, not a translation.) Does Matthew intend us to understand here a strictly “legal” righteousness—that is, Joseph’s determination to uphold the Law of Moses, and, if so, what “options” were open to him with regard to Mary? Or is there some other way of understanding the righteousness of Joseph? (I take it that at this point, Joseph believed that Mary had been unfaithful, since the angel apparently has to tell Joseph of Mary’s supernatural conceiving, but this is not the only view in the commentaries.)

In v. 19, Joseph is described as i) Mary’s “husband” and ii) as “being righteous” and these expressions are linked to the two following clauses—”not willing to expose her (Mary) publicly” and “purposed secretly to put away her”. The word for “not willing” is a strong word— Joseph was absolutely determined not to do such a thing, whereas the word for “purposed” is weaker—a proposed plan. (adapted from Vincent’s Word Studies). I suggest that we can assume that the righteousness described is strongly linked to these subsequent clauses: it is, to a large extent anyway, an explanation for them.

However, as we saw in an earlier post (The Birth of Jesus in Matt. 1:18-25—Part 2) when considering the linkage between sections 1 and 2 of vs. 18-25 that “Joseph son of David” is structurally linked with “Joseph the husband of her”, and the angel’s words “Do not fear to take Mary thy wife . . “ are structurally linked with Joseph’s righteousness and his plan to protect Mary from shame and put her away quietly. So, if we accept this linkage, we have two further pieces of information to consider. The first is that Joseph’s status as David’s son is important, and that Joseph was afraid to take Mary as wife, and that it was this fear, presumably in connection with Joseph’s Davidic sonship, that was a significant factor in Joseph’s thinking and his dilemma.

In the light of all this, Joseph appears as a wonderful man as I hope to show.

First of all, it appears that something was making Joseph afraid of taking Mary. Now, as far as Joseph understood things, Mary had broken God’s law, and in one sense, justice—legal righteousness would be served by letting the law take its course, and that would involve exposing Mary to great shame at the very least. Joseph’s cast iron determination for that not to happen shows a certain independence of mind with regard to God’s law and how best to go about putting it into effect. Joseph was determined that sin would go unpunished, and that does not quite square with the determination to uphold the law and maintain the purity of the nation. Rather, Joseph seems determined to do all within his power to cover over Mary’s assumed immoral behaviour with a cloak of secrecy and evasion—to as it were save her from her sin—and from the demands of the law— hence the link between Di) and D`ii`) in our analysis. We are privileged to know quite a lot about Mary’s lovely character and tenderness from Luke’s account, and we can readily understand Joseph’s absolute determination—even at the cost of strict obedience to the Law of Moses—to shield her. Presumably, Joseph had also thought ahead to Mary and the child’s future provision — since to continue avoiding her public exposure, he would have to go on providing for her materially too.

Well, we have seen that Joseph’s righteousness seems paradoxically to avoid the law of Moses. But surely, following this line of thought, Joseph would demonstrate even greater righteousness by marrying Mary, and bringing up her child. (Scripture tells us for example in 1 Pet. 4:8 that love covers a multitude of sins.) I think there is a suggestion in the careful wording of some of the commentators that, in their view, Joseph, in planning to put away Mary, was not intending to behave towards her quite as nobly as he might have done. I would like to suggest that, had that actually been the case, the angel would have said to Joseph something like “Joseph, do not be too proud to take Mary . .” – if Joseph’s concerns had been to avoid social shame or his manly pride had been wounded. Of course, it is possible that Joseph would fear for the uncertain future with a wife who could behave in an inappropriate way, but if we couple, “Joseph, son of David“ with “do not fear . .” then we can see that Joseph is really as noble as it is possible to be. He would I suggest under other circumstances have been prepared to marry Mary, even though it was doubtless not exactly as he would have wished things to have been, But it is possible to understand our text, and the preceding genealogical table as suggesting that Joseph was actually the Davidic heir and that he was aware of his royal heritage—that he, despite his humble occupation, was the heir of the Davidic kingship—and so was not free before God to adopt just anyone into the royal line from which the Messiah would come. The adopted son would be the firstborn in Joseph’s adopted family, and heir to the throne. That is why, on this understanding, I suggest David was afraid to marry Mary, and why the angel’s words answered so perfectly to Joseph’s dilemma. But the angel’s words showed that there cannot ultimately be a conflict between love and obedience to God’s purposes, and, in marrying Mary, Joseph would be both loving her and enabling God’s eternal purposes to come to fruition.  Joseph appears in an excellent light in this passage!

Categories: Chiastic and Other Structures, Matthew's Genealogy of Christ